Positioning for a Small Cap Recovery

By Simon KawaguchiNovember 10, 2022No Comments

Positioning for a Small Cap Recovery.

We wrote about small caps and recessions in August and have repeatedly made the case that timing these things is fraught with risk relative to sticking with a disciplined investment program. Regardless, the number one question we get when talking with investors relates to timing small cap allocations in the face of a recession, and positioning for the eventual recovery so we have had another go at it.

From our prior note: The key conclusion, not surprisingly, is that small caps underperform large caps leading into an economic contraction. Given markets are forward looking, most of the underperformance (4-6% on average vs the market) comes six months prior to the contraction (recession) and usually co-incident with a pre-recession slowdown…. the strongest and most statistically significant part of the cycle for small cap returns is the post- recession recovery stage – which means if investors are going to try and time a recession and get out, they need to be confident of being able to get back in – which presents both a timing and liquidity challenge.

To give a more tangible example of what this is like to live through, we have looked at the past two recession driven periods of small cap underperformance in Australia to frame the drawdowns experienced and the time over which the adjustment happened. For some this may serve as a map to where we are today. We would repeat our belief that investors are better off sticking with their active manager program, and we will provide the evidence in this note as to why. 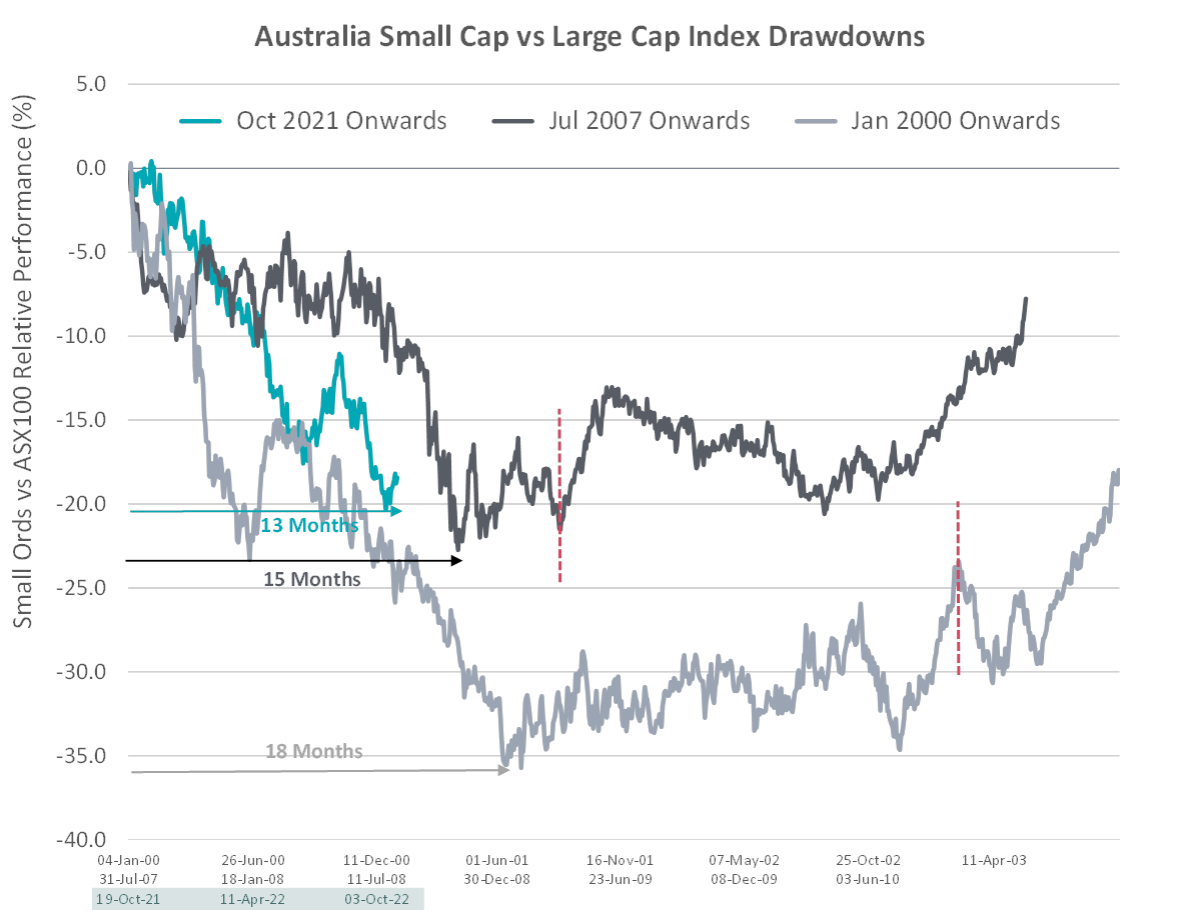 The first period we looked at was the post 2000 tech wreck, where fears of a recession resulted in the S&P / ASX Small Ordinaries Index (small caps) underperforming the S&P / ASX 100 Index (large caps) by 35%. This underperformance went for 18 months (to about June 2001) before stopping, after which small caps and large caps performed similarly. Interestingly small cap underperformance stopped well before the overall market bottomed (March 2003) indeed by the time the overall market low was reached, small caps had outperformed large caps by 10% since the June 2001 nadir.

To put the current small cap underperformance in this context, since the peak of small cap outperformance in early October 2021, the small cap index has underperformed large caps by 18.5% so far and this underperformance is around 13 months old. In both distance and time, we are likely at least through the halfway point, and possibly much closer to the end than the beginning. Few people we speak with share this view and for many it will likely be Q1 next year (15+ months from the peak) when people begin to consider re-allocating to small caps.

For anyone who didn’t live through the 2000-2003 period or 2007-2009 and believes the current period is somehow worse, we suggest going back and looking at what was happening in the world and in markets. It was a pretty rough time.

Why then are we so confident that investors are better off sticking with their active investment plan rather than trying to time the market given there are such large performance differences on offer?

The simple reason is that active small cap manager performance is not the same as the index, particularly in periods of steep underperformance.

Investor focus continues to be on the downside risk of small caps. We think the aging of this re-pricing process means looking at positioning for recovery – or at least an end to small cap underperformance – maybe more fruitful. The outperformance of the index in a recovery, potentially added to by active alpha, may happen soon and if it does history suggests it will be significant. Or it may be years away and the index weighed down by too many low-quality stocks may struggle. Either way, staying disciplined, actively investing in quality and not trying to time a market for yesterday’s risks remains the most likely way investors will compound wealth from here.